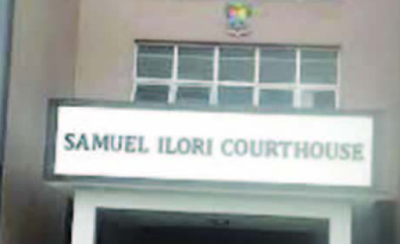 Five domestic workers have been arraigned before an Ikeja Magistrates’ Court in Lagos for allegedly breaking into their employer’s room and carting away her gold jewellery valued at N105m.

According to the police prosecutor, Inspector Raphael Donny, the defendants conspired among themselves and entered into the bedroom of their employer, Mrs Oluyemisi Wada, who had travelled out of the county, and stole her gold jewellery worth N105m.

Donny said the defendants committed the offences with others still at large on November 23, 2018, around 9pm on Banana Island, Ikoyi, Lagos.

He said one of the defendants, a housemaid, left the house to an unknown destination for a week before the personal assistant to the complainant got to know about the stolen jewellery.

The prosecutor stated, “The PA to the complainant received a phone call from the complainant from the United Kingdom to retrieve her bedroom keys from one of the defendants, who was a cook, in order to check the room.

“The PA met the complainant’s bedroom door ajar and upon entering, he discovered that her safe containing her gold jewellery valued at N105m had been carted away by an unknown person.

“On the same day, the said housemaid called the PA with a foreign phone number and told him that she did not know how she found herself at the Ghana-Togo border.

“The police saw other defendants from the CCTV footage watching the premises to know if the coast was clear for the housemaid, who is the prime suspect, to come out from the house before exiting the main gate.”

The charges read in part, “That you, Segun Akintola, aka Akarigbo; Tomisin Alade, aka Lotto; Felicia Musa; Amaka Irozuru, aka Amina; Zakara Yau, aka Saka, and others now at large, on November 23, 2018, around 9pm, at No. 18B Banana Island Road, Ikoyi, Lagos, in the Lagos

Donny said Section 287 of the law stipulated a seven-year jail term for stealing, while Section 307 provided for three years in prison for housebreaking.

The defendants pleaded not guilty to the charges.

The presiding magistrate, Mrs B. O. Osunsanmi, granted the defendants bail in the sum of N500,000 with two responsible sureties each in like sum.

Osunsanmi said the sureties must be gainfully employed with evidence of three years tax payment to the Lagos State Government and have their addresses verified by the court.