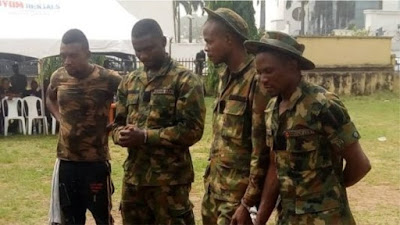 Five Army officers suspected to be fake soldiers, Tuesday were paraded at the Imo state police command headquarters in Owerri.

The Commander 34 Artillery Brigade, Obinze Owerri, Brigade General H. I. Bature, stated this during the signing of the peace Accord/Agreement by the Imo state governorship candidates ahead of the 2019 general elections. He also said that two out of the five suspects were caught escorting a politician, but the Army commander did not mention the name of the politician said to be enjoying the security of the fake Army officers.