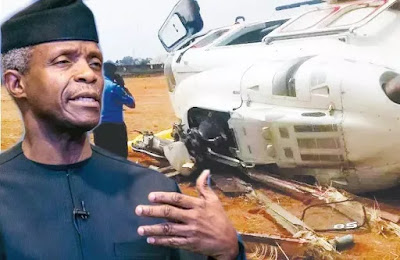 In the report released on Wednesday, the AIB said the crew lost visual contact with the ground at about 50 feet owing to a brownout – (dust generated when landing on a sandy area) – that enveloped the helicopter.

According to the agency, the helicopter experienced a hard landing and consequently rolled over.


While the AIB says the investigation into the crash is still ongoing, the Commissioner and Chief Executive Officer, Akin Olateru, gave two safety recommendations to the Nigerian Civil Aviation Authority (NCAA) and the operator, Caverton Helicopters Limited.

Olateru asked the NCAA to issue an advisory circular to helicopter operators on the effects of brown out and how to mitigate its effects.

Secondly, he asked Caverton Helicopters to carry out proper risk analysis and assessment before operating flights into unapproved landing pad.

The chopper carrying the Vice President, his entourage and three crew members, had crash-landed at the Kaaba Stadium on February 2.