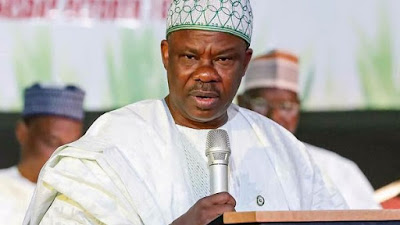 Ogun State Governor Ibikunle Amosun has declared he would go into a full blast campaign for his anointed candidate, Hon Abdulkadir Akinlade of the Allied Peoples Movement (APM) ahead of the March 9 gubernatorial contest.

Amosun, who was reacting to his victory at the last Saturday’s National Assembly election in Ogun Central Senatorial district, said he decided to step down the planned campaign for a day in honour of his aide, Mr. Adeniyi Adesanya, who died in a ghastly auto crash on the eve of the polls.

The Governor, who is Senator – elect on the platform of the All Progressives Congress (APC), also boasted his God was greater than that of his foes.


He declared this was why they did not succeed when there was a gang up against him during the contest.

According to him, the released results betrayed the fact that there was little difference in numbers votes cast for him and those for President Muhammadu Buhari during the Presidential and National Assembly elections.

Amosun said irrespective of what you do or how perfect one is, there some people would not like you.

He said: “I’m happy for the result of the election, people have benefited from it, that is the way life is.

“People know who they were voting for in APC, clearly when the result was out, check Mr. President result and check mine you will see the are little difference.

“Don’t think that everybody will love you even how much perfect you may be, we are humans, there are some people that won’t like you and even if they don’t hate you, they will just don’t like you.

“I don’t hate anybody. Truly I wasn’t taking them serious that they wanted to gang up against me but if you see the result of the election you will know that truly they ganged up against me but that God in me is far greater than God that is in all of them.

“Yes, I am happy I want to represent my people, they have given me their votes, I am really grateful, elated and I can’t thank them enough.

“From today, we are stepping down campaigns in memory of our colleague that lost his life and we thank God for SSG’s life, we won’t be able to start the campaign today.

“Indeed we just stepped down the excos and tomorrow we are starting fully for my candidate, our candidate Abdulkabir Adekunle Akinlade, from tomorrow all our Assembly members and people are ready for the campaign.

“People have benefitted from our APC, but no problem because I have to come out that this election it is APC because President Muhammdu Buhari must win and truly we have demonstrated that.“