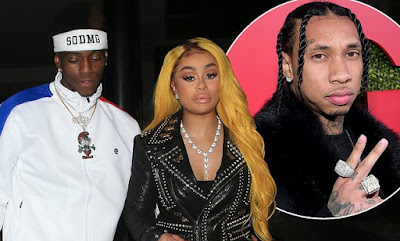 They confirmed their unlikely romance when they stepped out hand-in-hand for a Valentine's Day date.

But a new report claims Blac Chyna and Soulja Boy were only pretending to date in order to infuriate her ex Tyga - until they developed real feelings for one another.

The Crank That hitmaker has been feuding with Tyga over who had the biggest comeback last year and allegedly thought hooking up with his ex would be the perfect revenge.

Meanwhile, Blac Chyna - who shares son King Cairo with her ex-fiancé Tyga - hit out at the Ayo rapper earlier this month, claiming he doesn't pay her child support and she's 'sick of that s**t'.


However, Blac and Soulja Boy weren't expecting anything romantic to stem from their masterplan to fool Tyga.

They reportedly started to like each other after a few fake dates and have developed real feelings, according to TMZ.
They are said to be taking things slowly, but have now decided to make things official.