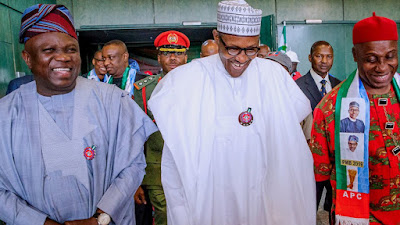 President Muhammadu Buhari has arrived Lagos for the Presidential Campaign of the All Progressives Congress (APC).

The President arrived at the Presidential Wing of the Murtala Muhammed Airport, Lagos on Saturday morning.

The Personal Assistant to the President on New Media, Bashir Ahmad announced President Buhari’s arrival through his twitter handle.

He was received by the state governor, Akinwunmi Ambode, Kano State Governor Abdullahi Ganduje, Minister of Labour and Employment Chris Ngige and other officials of the party.