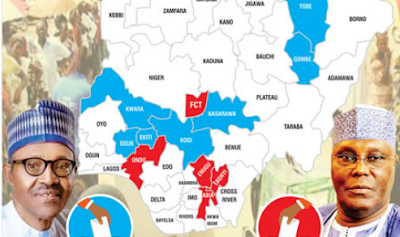 The Independent National Electoral Commission on Monday started the announcement of the results of Saturday’s presidential election.

As of the time of filing this report, INEC had announced the result in 11 states and the Federal Capital Territory.

The presidential candidate of the All Progressives Congress, President Muhammadu Buhari, won in Ekiti, Nasarawa, Yobe, Kwara, Kogi and Gombe, while his closest rival, Atiku Abubakar of the Peoples Democratic Party, won in Ondo, Abia, Ebonyi and the FCT.