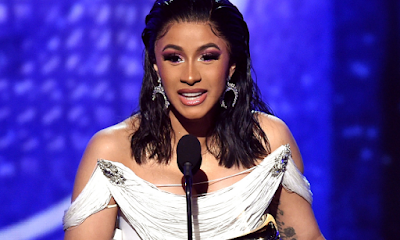 Case closed! Cardi B has blasted those discrediting her Grammy win and has finally deactivated her Instagram account.

Following criticism that she was undeserving of her best rap album Grammy win and some social media drama where she was pinned against her nemesis Nicki Minaj by the BET Network, the rapper got heated in an expletive-filled rant on her Instagram before finally deactivating it.

The video, which was captured by a fan account, has since been deleted and was followed by Cardi, 26, deactivating her Instagram entirely.

“It’s not my style for people to put other people down to uplift somebody else,” she began in the clip, referencing the dig BET made at Nicki, which said she was “being dragged by her lacefront” after Cardi’s Grammy win.

“However, I’ve been taking a lot of s— today. I’m seeing a lot of bulls— today and I saw a lot of s—  last night, and I’m sick of this s—. I work hard for my motherf— album,” she angrily stated.

The “I Like It” rapper continued her rant by reflecting on the reactions from last year’s Grammys results. Cardi earned two nominations in best rap performance and best rap song for her track “Bodak Yellow” but did not win for either one.

“I remember last year when I didn’t win for ‘Bodak Yellow’ and everybody was like, ‘Cardi got snubbed,'” she recalled. “Now this year’s a f— problem?! My album went two-time platinum, my n—, and every chart that there was, my album was always Top 10. Number one album, as well.”

She also noted how she “worked her ass off” and spent endless hours in the studio, despite being pregnant with her daughter Kulture Kiari, now 7 months.

“I locked myself in the studio for three months, my n—. Didn’t go to sleep in my bed sometimes for four days straight — pregnant!” she explained. “While everybody was harassing me like, ‘You’re not gonna do it, we know you pregnant, your career’s over…'”