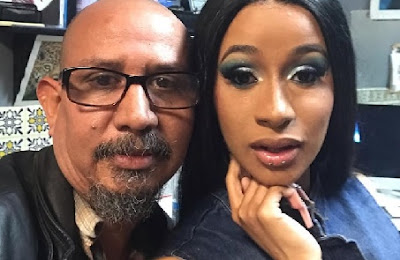 Cardi B is proudly showing off a new piercing and the tattoo artist who gave it to her had no clue she was a huge celeb!!!

Luis Vega, the owner of City of Angels Tattoos, explains, Cardi randomly walked into his shop looking to get her lip pierced. Luis says he didn't know it was Cardi until they started talking.

Luis thought he recognized CB's face, and initially figured she was just a former client. After Cardi told him she was from New York, Luis told her she looked and sounded like Cardi and that's when light bulbs started going off.  Luis slowly realized he was dealing with an A-lister, but his suspicions weren't confirmed until he poked his head outside and saw Cardi's entourage in a caravan of luxury cars.

As for the piercing he says Cardi paid $25. However, Luis has been so inspired by Cardi's visit, he's honoring her the rest of the month with a special $20 piercing for anyone who comes through.
at February 14, 2019