Cardi B Stands By Khloe Kardashian Amid Heartache 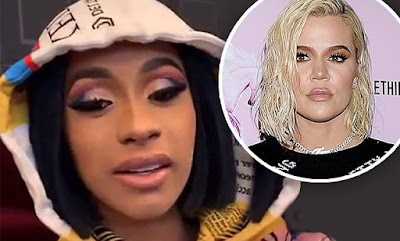 Cardi B has hit out at people 'celebrating' Khloe Kardashian's heartache. The rapper had Khloe's back when she took to Instagram Live on Wednesday to discuss the situation and reflected on her own drama with cheating husband Offset.

'Obviously this whole Khloe Kardashian thing...everybody is just like celebrating that that happened to her and it's like why?' the 26-year-old Bodak Yellow hitmaker pondered.
It emerged this week that Khloe has split with Tristan Thompson amid reports he hooked up with close family friend Jordyn Woods over the weekend.

Cardi said that she couldn't understand why people wanted 'karma' for her when she'd obviously been through a hard time already.


'Whatever karma that y'all felt like they deserve, I think they already have it, so it's like why do you guys keep wishing that on a woman?' she asked. 'Especially a woman that has a daughter?'

Cardi explained, 'Y'all know it feels like your heart is literally bleeding and you just want to die and you can't even sleep.' before adding, 'it's like it's mainly the women in the comments. It's like, why do you guys like manifest and be happy off of that?

'I feel like, alright she already learned her lesson, something real f**ked up happened before she gave birth, so it's like why do you guys keep, I don't know, like enjoying other people's pain?

'Enjoying other people misery, knowing how much it hurts when a guy that you're in love with, especially the father of your child, does something wrong. It's just so sad,'

Cardi continued explaining her disappointment that people who talk about 'uplifting' women seem to be the ones taking pleasure in someone else's pain.

'I feel like everybody always want to talk about how they want to uplift women...but it be like the same women that be laughing in the comments when another woman is going through some s**t and it's all the time...I feel like that s**t is whack.'
Cardi concluded her message reflecting on her own personal heartache, as she said: 'I be feeling bad because I think everybody been in those shoes, I've been through it. Friends been through it. Family been through it.

A lot of y'all b--ches been through it. That's why y'all always commenting on their comments like, 'I would never allow a man to do that to me,'

Cardi is working on her relationship with rapper husband Offset who she split with last year following the birth of their daughter Kulture in July.