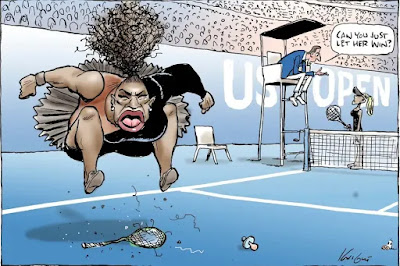 A controversial cartoon of Serena Williams published in an Australian newspaper last year did not breach media standards, a press watchdog says.

The cartoon depicted Williams jumping above a broken racquet next to a baby's dummy in the US Open final.

Critics complained that the caricature used racist and sexist stereotypes of African-American people.

The Australian Press Council noted that some had found the image "offensive", but accepted the publisher's defence.


Williams sparked controversy during her loss to Naomi Osaka in September for her on-court behaviour where she accused the umpire of sexism and being a "thief".

The Herald Sun newspaper and cartoonist Mark Knight have consistently called their depiction a comment on Williams's behaviour, denying it was racist or sexist.

The press watchdog said the newspaper had "sufficient public interest in commenting on behaviour and sportsmanship".
at February 25, 2019