Did Empire Star, Jussie Smollet STAGE Hate Crime On Himself To Save His Job? 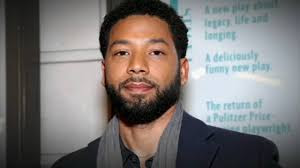 Empire actor Jussie Smollet has been accused of staging last month's racist and homophobic attack by two local TV news stations - but police are pushing back at the claims calling them 'unconfirmed' and the sourcing 'uniformed and inaccurate'.

ABC Chicago and CBS Chicago both claimed that 'multiple sources' had said detectives were considering the possibility that Smollett - together with two male persons of interest brought in for questioning Wednesday night had faked the story because Smollett was being written off of Empire.


The persons of interest are allegedly two former extras on Empire who are brothers and friends of Smollet who traveled to Nigeria hours after the attack and returned on Wednesday when they were arrested at Chicago O'Hare airport.

Cops raided their home on Thursday and found numerous items including bleach and an Empire script.

Fox has now denied that Smollet was being written out of the show and Smollet has also repeatedly denied staging the attack.