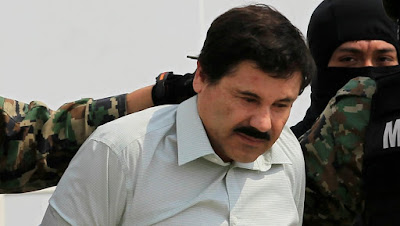 Mexican drug kingpin Joaquín "El Chapo" Guzmán has been found guilty on all 10 counts at his drug-trafficking trial at a federal court in New York.

Guzmán, 61, was convicted on numerous counts including the distribution of cocaine and heroin, illegal firearms possession and money laundering.

He has yet to be sentenced, but the verdict could mean life in jail.

Guzmán was arrested in January 2016 after escaping from a Mexican prison through a tunnel five months earlier.

The Mexican was accused of being behind the all-powerful Sinaloa drug cartel, which prosecutors say was the biggest supplier of drugs to the US.

Tuesday's unanimous verdict by a jury in Brooklyn, which was read out in a packed courtroom, followed an 11-week trial.

Guzmán, wearing a dark suit jacket and tie, showed no visible sign of emotion as the verdict was announced.

As he was escorted from the courtroom, Guzmán shook the hands of his lawyers before exchanging glances with his wife, Emma Coronel, a 29-year-old former beauty queen, and giving her the thumbs up.

Judge Brian Cogan, who presided over the trial, thanked the jurors for their dedication at what he described as a complex trial, saying it was "remarkable and it made me very proud to be an American".

Guzmán's lawyers said they planned to launch an appeal.