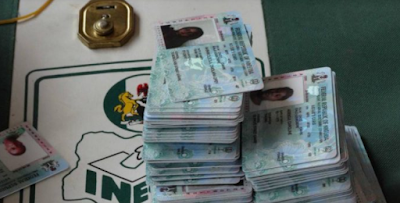 The National Drug Law Enforcement Agency has announced the arrest of one Okon Bassey in possession of 244 Permanent Voter Cards in Akwa Ibom State and dislodged 35 drug joints and hotspots in Kano State ahead of the elections.

A cash sum of N310,000 was recovered from the suspect who was arrested in Mbo Local Government Area of Akwa Ibom State.

The Akwa Ibom command of the NDLEA also arrested 120 suspected hard drug dealers found to be in possession of 51kg of cannabis, 259gm of heroin, 17gm of cocaine, 500gm of Tramadol Diazepam and Polypro.


The agency said the suspected PVC thief had been handed over to the Independent National Electoral Commission for further investigation, while others caught with hard drugs had been charged to court.
at February 22, 2019