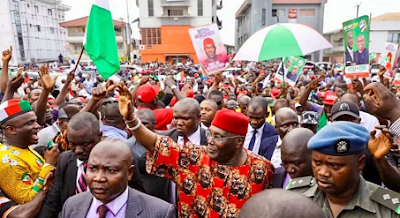 Mr Abubakar, however, urged Nigerians to exercise patience and not be provoked before the new dates announced for the exercise.

Mahmood Yakubu, chairman of the Independent National Electoral Commission, announced at about 2:40 a.m. Saturday that the election had been postponed, barely hours after Nigerians were set to hit the polling units.


The elections would now hold on new dates scheduled as February 23 for presidential and National Assembly elections and March 9 for governorship and state assemblies elections.

“This postponement is obviously a case of the hand of Esau but the voice of Jacob. By instigating this postponement. The Buhari administration hopes to disenfranchise the Nigerian electorate in order to ensure that turn out is low on the rescheduled date. Nigerians must frustrate their plans by coming out in even greater numbers on Saturday, 23 February and Saturday, 9 March respectively,” the former vice-president added.