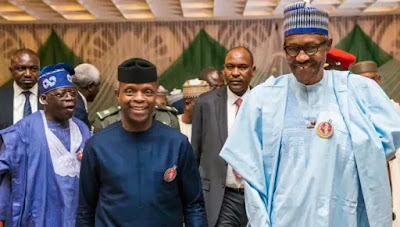 A national leader of the party, Bola Tinubu, is also at the meeting.The party is meeting following Saturday’s postponement of the general elections.

The chairman of the party, Adams Oshiomhole, is launching scathing attacks on the Independent National Election for the shift.

Mr Oshiomhole says the commission’s chairman is incompetent. He also accused the commission of hinting the opposition PDP of plans to postpone the polls, saying he could swear with the Koran.

Also in attendance are the Senate leader, Ahmed Lawan, senators, Secretary to the Government of the Federation(SGF), Boss Mustapha, ministers, among others.