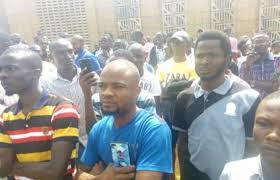 The National Association of Nigerian Students has suspended its proposed nationwide protest over the postponement of the Presidential and National Assembly elections, scheduled for today.

The spokesperson of the association, Azeez Adeyemi disclosed this while speaking with newsmen in Abeokuta this morning.

NANS had threatened to stage a nationwide protest today against the postponement of the elections by the Independent National Electoral Commission.