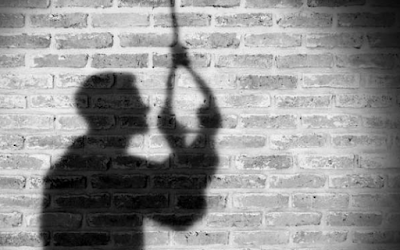 Itapaji Ekiti in the Ikole Local Government Area of Ekiti State was, on Monday, thrown into confusion as a 60-year-old man, Mr Daniel Sakpe, hanged himself in his house in the community.

Sources in the community said the man sneaked out of bed around midnight and pretended to be going to the toilet.

According to the sources, when the father of five did not come back to bed, his wife decided to call him without response.

One of the sources said, “When the wife could not get any response from her husband, she raised the alarm. The woman also woke up her daughter, Rebecca.


“It was in Rebecca’s attempt to search for her father with a torchlight that she found his lifeless body dangling from the ceiling in one corner of the house.”

According to him, nobody can tell the reason for Sakpe’s action.

Neighbours in the Omobayi area of the community, who expressed shock at the development, said there was nothing unusual about Sakpe’s behaviour that could have made anybody to suspect that he was nursing any ill feeling.

One of the neighbours, who identified himself simply as Tunde, said, “The deceased was not moody and didn’t show any sign that he would commit suicide. He was one of those who conducted the church service in high spirit on Sunday.”

A police source in Ikole Ekiti, who confirmed the development, said officials from the Ikole Police Station had recovered his body and investigation had begun into the incident.
at February 26, 2019