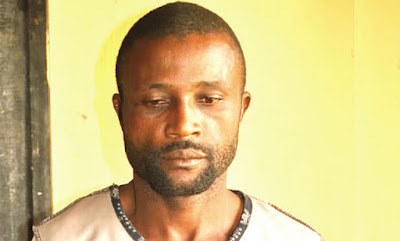 Onuchukwu of the Kwamba area, Suleja, was arrested following a complaint by the parents of the victims.

Northern City News gathered on Sunday that the father of three allegedly lured his victims with N50 to an uncompleted building and had s-x with them several times.

The suspect said he gets aroused whenever he saw underage girls in his neighbourhood.


He said, “I don’t know what has come over me; each time I see little girls in my area, I get aroused and I would want to have s-x with them regardless of the fact that I am a father of three children.

“I have been into this wicked act for more than four years and it looks as if somebody had placed a curse on me; nothing works for me and at times, I felt I have sinned against my destiny.”

Onuchukwu would be arraigned in court after investigation.
at February 11, 2019