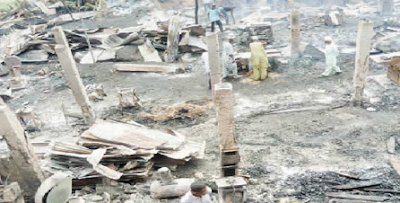 Fire razed part of the Ifelodun Plank Market, reputed to be the biggest in Osogbo, in the early hours of Tuesday.

Residents of Alekuwodo, where the plank market is located, said they saw smoke coming out from the market around midnight and contacted some of the traders.

Over 40 machines and planks worth over N150m were said to have been lost to the inferno. Also, a newly-completed mosque built by the traders in the market was partially razed by the inferno that lasted several hours.

Osun State Governor, Mr Gboyega Oyetola, during a visit to the market, commiserated with the traders on their losses and urged them to ensure that they henceforth observed necessary safety precautions to forestall the reoccurrence of such an incident in the future.