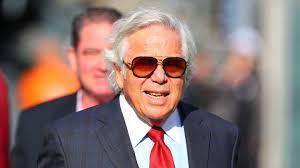 Florida prosecutors on Monday confirmed they will charge New England Patriots owner Robert Kraft with soliciting prostitution at a local spa, and issue a summons for his arrest.

One of the two incidents that prosecutors are charging Kraft for occurred in Jupiter, Fla., with a woman on the morning of Jan. 20 — hours before the Patriots defeated the Kansas City Chiefs in Missouri in the AFC Championship, according to a charging document.

A day before that, police said, Kraft paid two women at the spa for an encounter, for which he has also been charged.


The 77-year-old Kraft, whose football team won a record-tying sixth Super Bowl earlier this month, faces a possible sentence of up to one year in jail if convicted of the two misdemeanor charges.

The billionaire also faces a $5,000 fine, 100 hours of community service and attending a class in the dangers of human trafficking — all of which are mandatory. He is due to be arraigned in Palm Beach County Court on April 24.

Kraft is not in custody, but "his attorney has been provided the summons," said Palm Beach County State's Attorney David Aronberg at a press conference.

Kraft through a spokesman has denied the allegations.
at February 26, 2019