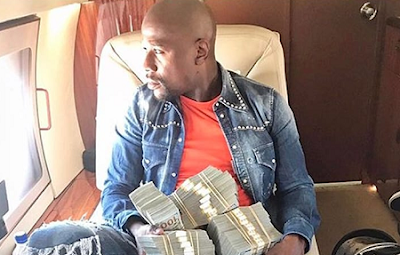 Floyd Mayweather says he doesn't give a DAMN about the Gucci boycott -- telling TMZ Sports no one tells him what to do or what to buy and that's why he dropped a FORTUNE at the store Monday night.

The boxer along with his entire TMT crew rolled into Gucci in Bev Hills and when they told him about all of the stars calling for a Gucci ban over a sweatshirt that resembled blackface, Floyd scoffed.

"I'm not no follower, I do what the f*ck I wanna do," Floyd told them.


When we told Floyd that stars like T.I. and Spike Lee would be upset with him, Floyd laughed.

Outside the store, Floyd and his crew showed off a BUNCH of bags filled with Gucci -- dropping a fortune on clothing and accessories.

"I'm not a follower," Floyd added ... "You know when everybody else they say, 'Everybody gonna boycott?' I say guess what, this boy gonna get on a yacht and live life."

"We all know racism still exists but that's not gonna stop my drive. I've got friends from all walks of life and to me of course, black lives matter first ... but my thing is this, I'm gonna continue to go out there live life and be happy."

He added, "Half of the people that's on social media saying, 'Don't wear this, don't wear that,' I ain't never seen none of them supporting The Money Team."

After the Gucci run, Floyd flanked by his bodyguards Jizzy Mack and Badou went over to Neiman Marcus where the store stayed open past the normal closing time so Floyd could shop.