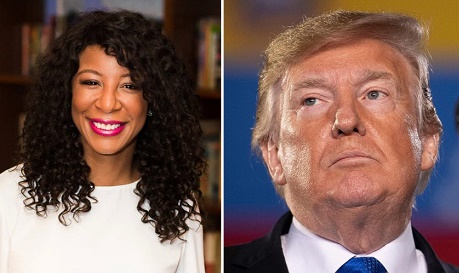 A female staffer on Donald Trump’s presidential campaign claimed yesterday that he had kissed her without her consent.

Alva Johnson, 43, said the then presidential candidate grabbed her hand and leaned in for a kiss on the lips as he exited from a car outside a rally in August 2016.

She says she turned her head and the unwanted smacker landed on the side of her mouth – branding it “super-creepy and inappropriate”.

Johnson, now launching a lawsuit against Trump, said: “I immediately felt violated because I wasn’t expecting it or wanting it. I can still see his lips coming straight for my face.


“I’ve tried to let it go. You want to move on with your life. I don’t sleep. I wake up at 4 in the morning looking at the news. I feel guilty.

The only thing I did was show up for work one day.”

The former Trump campaign worker broke her silence, two-and-a-half-years after the alleged kiss, during an interview with The Washington Post.

Events planner Johnson said she told her boyfriend, mother and stepfather about the incident later the same day, an account all three confirmed to the newspaper.

More than a dozen women have publicly accused Trump of inappropriate behaviour, but Johnson is the only woman to come forward since he became president.

She had consider coming forward in October 2016, after video surfaced of Trump bragging about kissing and groping “by the p****”.

The African-American mum-of-four, from Alabama, got involved in the tycoon’s campaign because she thought he could use his business experience to help black communities.

She claimed she first met Trump at a November 2015 rally, where he looked her up and down and said: “Oh, beautiful, beautiful, fantastic.”

Two months later, she joined his campaign as a director of outreach and coalitions in Alabama.