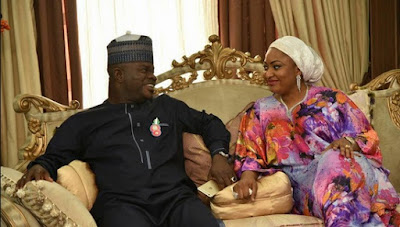 Amina Bello, the wife of the Kogi state Governor, Yahaya Bello, has been involved in a car accident at Kabba, the area where the aircraft of the Vice President, Yemi Osinbajo, crash-landed last week.

The Governor’s wife and everybody in her entourage were safe and unhurt. Confirming the development on Saturday, the chief press secretary to the Governor, Onogwu Muhammed, disclosed that the accident occurred around Oshokoshoko area of Kabba as the governor’s wife was on her way to Isanlu for a rally organised by a member of the All Progressives Congress, APC.


According to him, “In appreciation to God Almighty for his faithfulness to the New Direction family, the Kogi state government wishes to announce that three aides to the governor and his wife survived an accident this morning.” “The government appreciate God once again, that all persons are in perfect condition.