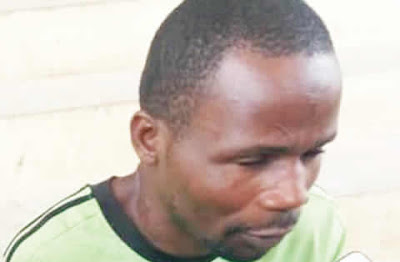 Men of the Ondo State Police Command have arrested one Longbab Bouguen for allegedly raping a prophetess (name withheld) at the Agbogbo area of Akure.

The suspect, who was apprehended along with an alleged accomplice, Daniel John, was also said to have forcefully collected money from the victim after raping her.

Speaking on the arrest on Wednesday, the state Police Public Relations Officer, Mr Femi Joseph, explained that the victim was returning home around 8.30pm on the fateful day when she was attacked and dragged into the bush by Bouguen, who forcibly had knowledge of her.


Joseph said, “One prophetess of the Celestial Church of Christ located in the Agbogbo area, along the Akure/Owo Expressway, reported that a security guard, Longbab Bouguen, suddenly dragged her to a secluded area and forcefully tore her pants in order to have sexual intercourse with her.

“The suspect threatened the victim by brandishing a cutlass and knife, while putting on dark eye glasses and also dispossessed her of the sum of N700, which he consequently shared with a fellow security guard, Daniel John.”

The prophetess told a Punch correspondent that the suspect attacked her in the evening while she was going to the church.

The victim narrated, “I discovered that he was following me when I was going to the church and suddenly he grabbed me from the back and dragged me to one corner; I struggled with him but he overpowered me and showed me a knife, threatening to kill me if I shouted.

“I didn’t want him to stab me, because there was nobody around to rescue me. As he was struggling with me, he tore my clothes and my pants; I didn’t allow him to penetrate so he ejaculated on my body. Thereafter, he collected the money on me before allowing me to go.”

Confessing to the crime, the 39-year-old Bouguen attributed his action to the devil, adding that he could not explain what came over him.

“Though I attacked her and tore her clothes and pants, I had not penetrated her before I ejaculated on her body. I allowed the woman to go after collecting the sum of N700 on her,” Bouguen confessed.

He, however, said John was not involved in the act, explaining that he only gave him a part of the money he collected from the victim.

“When he (John) came to me begging for money for food, I gave him N200 out of the money I collected from the woman, because he was hungry. He knew nothing about the act,” the suspect explained.

The PPRO said Bouguen would soon be charged to court after the completion of investigation.