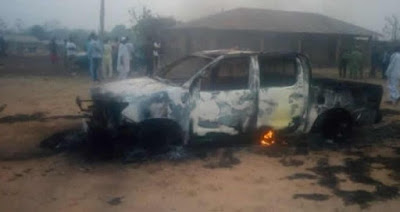 Four operatives of the Ondo State Command of the National Drug Law Enforcement Agency lost their lives on Sunday when some unknown gunmen attacked them at Ifon, the headquarters of the Ose Local Government Area of the state.

The deceased were said to have been at a checkpoint on the Ikaro Road in Ifon when the hoodlums attacked them.

After killing the officers, the gunmen allegedly stole their riles and set their patrol van ablaze.


The names of the deceased were given as Abduljalad Mohammed, Wellington Emmanuel, Magaji Aliu and Mohammed lliyasu.

A source told Punch correspondent that the hoodlums came on a motorcycle and opened fire on the NDLEA operatives at the checkpoint.

The killers were suspected to be cannabis dealers in the area.

The source said, “The gunmen struck around 6.30pm on Sunday; they came on a motorcycle and were armed with AK-47 rifles and shot dead the four NDLEA operatives at the checkpoint in the lfon Division.

“They also burnt the NDLEA Toyota Hilux van. The operatives were five in number at the checkpoint but only one of them managed to escape. After killing the officers, the gunmen also took their rifles away.”

The NDLEA Commander in the state, Mr Haruna Dagara, who confirmed the incident, said it was a case of intentional killing, adding that the command had taken some steps to arrest the hoodlums.