How We Killed Badeh, Suspects Speak 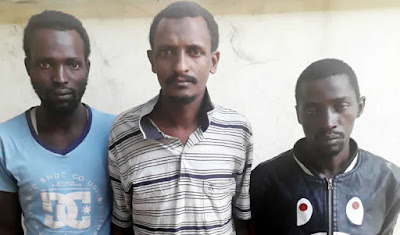 One of the five suspected killers of the ex-Chief of Defence Staff, Air Vice Marshal Alex Badeh, has revealed his role in the murder.

The suspect, 25-year-old Shuaibu Rabi, a native of Bade area of Kaduna State, said he got N25,000 out of the money they stole from the late Badeh’s car.

The former CDS was ambushed and killed on December 18, 2018, along Abuja-Keffi Expressway by some gunmen on the way from his farm. Badeh’s driver was also shot and his friend, who was also in the vehicle, was kidnapped by the gang.


The arrested suspects had confessed to killing the retired military officer in order to dispossess him of money he supposedly wanted to use to buy farmland in the Panda area of Nasarawa State.

But his family had dismissed the suspects’ claims as a cover-up, insisting that Badeh did not discuss any plan to acquire land with them.

In his latest confession, Rabi, who was arrested alongside four others – Yahaha, Maube, Aliyu Usman, aka Ciroma, and Ibrahim Abdulahi – by operatives of the Inspector-General of Police Intelligence Response Team, said Maube invited him for the operation.

The suspect, who spoke through an interpreter during the week, said he was armed with a Dane gun and joined four other members of the Ak-47 wielding gang to open fire on Badeh’s car.

He said, “Before last Christmas, I went to the market in Panda and I met with Ciroma. He told me that there was a big man who has a farm in Panda and that the man was coming to buy another farm within the area. He said he wanted us to rob the man when he brought the money for payment. That was on a Friday.

“Ciroma told me that the man was coming on a Tuesday to pay for the land.  On that Tuesday, I went to my own farm and told a friend about it. We called Ciroma to know if ‘the job’ was still feasible and he asked us to come. We left together with another friend called Baso to meet Ciroma on a farm. He gave me a Dane gun. He also gave guns to some other members of the gang.

“When the operation started, Ciroma and the other members were in front of me and my friend. When we sighted the vehicle carrying the man, we started shooting. At that point, I can’t tell who killed the man. Ciroma brought out a bag from the vehicle and he gave me N25,000. He promised to give me more money later.”

Narrating how he organised the alleged robbery operation, Ciroma said he had hired two of the guns they used for the operation from his friends.

Ciroma, who has eight children, said the attack was masterminded by Maube, who was allegedly aware of the purported farmland the slain former CDS wanted to buy, as well as the arrangement for the payment.

He said, “Maube lives in Kare, close to Panda area. He told me that there was a rich man (Badeh) who has a farm in his area and he would need some guys to rob the man. I contacted Shuaibu (Rabi), whom I met in Gitata Market and told him about the plan and he got interested. Three days later, Maube called me and said that the man was on his farm and that I should call my guys.

“I called Shuaibu and told him that the man was around. Shuiabu came with two persons, Yahaya and Baso, to meet me at the market. Alhaji Maube then called me and said that the man had left his farm and was driving through Panda Road.  Alhaji Maube took a motorcycle and followed the rich man from behind while six others and I laid in ambush for the man at Zomgo area (of Nasarawa State).

“One Ibrahim Abdulahi, who was carrying Alhaji Maube, on a motorcycle, brought two guns to us. As soon as the vehicle he was in appeared, Abdullahi pointed it out to us and we came out from hiding and started shooting. I don’t know who fired the shot that killed the man.”

Ciroma added that when he opened the car, he found a bag containing money. He said he gave the money to Abdullahi for onward delivery to Maube, who did not come to the scene of the attack.

He said it was the following day when the news of Badeh’s murder was everywhere that he knew the person they killed was a former CDS.

On how he was arrested, 35-year-old Ciroma, a cab driver, stated that he was waiting for passengers at Panda market when a bus conveying policemen blocked his car.

“I am a cab driver and I usually ply Abuja-Keffi Road. I make N4,000 daily. I thought the operation would fetch me more money. I have two wives and eight children,” he added.

But Abudullahi, 26, who is a native of Kare in Nasarawa, told City Round that he did not know about the robbery until the gang struck. He also said he did not know the contents of the bag Maube asked him to deliver to the gang.

He said, “I am a farmer and I ride a motorcycle because I need extra money to fend for my family.  Alhaji called me on a Tuesday in December 2018, and he asked me to take him to Panda area. We stopped by at his shop and he went in to bring a bag. I don’t know what was in the bag. He then asked me to take the bag to Gitata and hand it over to Ciroma.

“Ciroma and Shuiabu collected the bag from me, after which they asked me to wait around. I went to the back of a farm and waited. A few minutes later, I heard gunshots and Ciroma called me to come for the bag I had given him. He also gave me another bag containing money and he asked me to give the bag to Alhaji Muabe.”
at February 23, 2019