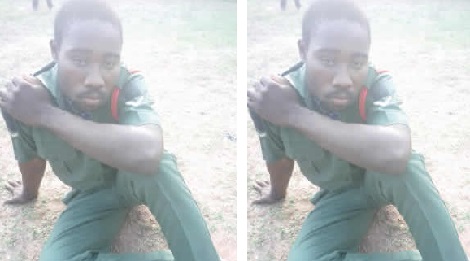 Operatives of the Special Anti Robbery Squad of the Imo State Police Command have arrested a dismissed soldier, Sampson David, for an alleged involvement in kidnapping and armed robbery.

Parading the suspect alongside others, on Wednesday, the state Commissioner of Police, Dasuki Galadanchi, said that one English pump-action gun and two pairs of military uniform were recovered as exhibits from David.

The CP said, “On December 5, 2018, SARS operatives arrested one Amarachi Ihejirika of Umugama, Owu-Amakohia in the Ikeduru Local Government Area, Imo State, in connection with unlawful possession of firearm and impersonation.


“She confessed that the gun and military uniform belonged to her fiancée, who claimed to be a soldier.

“The said Sampson David, who has been terrorising Owerri and its environs through kidnapping and armed robbery, was arrested by our gallant officers.”

Galadanchi added that upon interrogation, the dismissed soldier confessed that he stole the gun from the Nigerian Legion’s office in Abia State.

According to the CP, the command will arraign the suspect in court at the conclusion of investigation.

While commending the SARS Commander, Victor Geoffrey, and his team, Galadanchi said the command was ready to deal with issues of violence as the general elections approach.