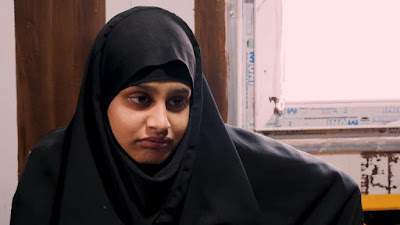 ISIS bride Shamima Begum has had her British citizenship revoked, according to reports. The 19-year-old's family was told the news in a letter from the Home Office.

It reportedly reads: "Please find enclosed papers that relate to a decision taken by the Home Secretary, to deprive your daughter, Shamima Begum, of her British citizenship.

"In light of the circumstances of your daughter, the notice of the Home Secretary's decision has been served of file today (19th February), and the order removing her British citizenship has subsequently been made."


The letter reportedly said the family had the right to appeal.

It advised her family to make Ms Begum aware of the situation, according to reports.

Ms Begum's family have said they are "disappointed" that the Home Office have written to them to say they intend to deprive her of her British citizenship, their lawyer Tasnime Akunjee said.

In a statement posted on Twitter, he said: "Family are very disappointed with the Home Office's intention to have an order made depriving Shamima of her citizenship.

"We are considering all legal avenues to challenge this decision."