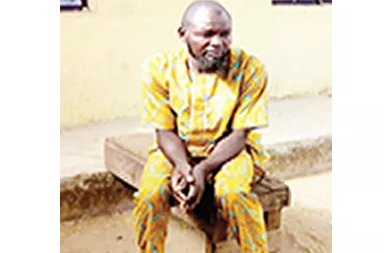 Police have arrested an Islamic cleric for allegedly defiling a six-year-old girl in his single room apartment at Bariga area of Lagos State. The suspect, AbdulLateef Mustapha (38), was said to have lured the girl into his room when his wife had travelled out of the state for a function.

The incident occurred on February 16 at Mojoyinola Street, Bariga. After the cleric had carnal knowledge of the girl, she told an elderly woman in their compound what her sister’s husband did to her. The woman then raised the alarm and brought it to the attention of a Non-Governmental Organisation (NGO), Child Protection Network.

The Coordinator of Child Protection Network, Somolu Branch, Mr. Toyin Okanlawon, said immediately the information got to the organisation’s notice, the officials moved swiftly and the matter was reported to the police who then arrested Mustapha the following day.


He said: “Initially, when the suspect was arrested by policemen from Bariga Division, he denied the allegation.

He said how can he sleep with her wife’s cousin? But when the girl was brought before him, it was then he opened up that he only slept with her thrice.

“When the girl was taken to the hospital, it was confirmed she was defiled and she had also being infected with Sexually Transmitted Disease (STD) and her bladder had been ruptured which made her to be bedwetting whenever she sleeps.” Some of the friends of the Islamic cleric berated him but were said to have pleaded with the DPO to pardon him.

His wife also reportedly begged for mercy, saying that they would go home and resolve it amicably. But the DPO was said told the suspect’s wife and friends that there was nothing he could do. According to the DPO, the matter is a state case which no one should toy with.

The matter has been transferred to the State Criminal Investigations and Intelligence Department (SCIID), Panti, Yaba, for further investigation.
at February 25, 2019