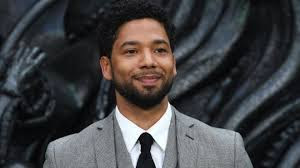 Anthony Guglielmi said charges were approved by the Cook County State's Attorney Office and "Detectives will make contact with his legal team to negotiate a reasonable surrender for his arrest."

Filing a false police report is disorderly conduct, according to Illinois code. A class 4 felony is punishable by one to three years, the code says.

Smollett's transformation from victim to suspect in a reported attack that captured national headlines came on the same day that a high-ranking police source said Chicago detectives were working to obtain the actor's financial records.

A Cook County grand jury met Wednesday just weeks after the young actor reported being the victim of a hate crime on January 29.

Smollett's attorneys released a statement: "Like any other citizen, Mr. Smollett enjoys the presumption of innocence, particularly when there has been an investigation like this one where information, both true and false, has been repeatedly leaked. Given these circumstances, we intend to conduct a thorough investigation and to mount an aggressive defense."