Jussie Smollett Is Given $100k Bail & Ordered To Surrender His Passport 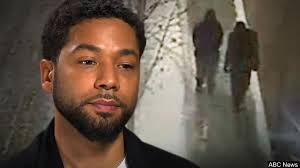 Jussie Smollett's bail has been set at $100,000 and he was ordered to surrender his passport at a bond hearing where he was supported by his family and prosecutors shared more details of his relationship with the two Nigerian brothers he allegedly paid to stage a hoax attack.

Three of the actor's five famous siblings, Jurnee, Jocqui and Jake, were pictured arriving at the Cook County Criminal Court before his bond hearing wearing sunglasses. They were later joined by their brother Jojo but their other sister Jurnee and mother Janet were not seen.

A judge set the actor's bail at $100,000 - the amount he gets paid for one episode of Empire - and told him to surrender his passport. It is unclear how much he will be required to pay of it but defendants are ordinarily required to pay at least 10 percent of their total bail amount. Smollett will return to court on March 14.


After the hearing, prosecutors gave a detailed description of how he put the hoax together.

Police say he knew Abel Osundairo, the older brother, because he bought 'designer drugs' from him. In text messages, he asked Abel for 'Molly' - the street name for ecstasy.

On January 25, he convinced Abel and his brother Ola to 'simulate' an attack on him, giving them specific instructions about which words to use and how to rough him up but not hurt him too severely.

He knew they were going to Nigeria days later and asked them if he could trust them, saying in his initial text message to Abel: 'Might need your help on the low. You around to meet up and talk face to face?'

Smollett took them to the location where he wanted the attack to happen outside his apartment, according to prosecutors, and even pointed to a surveillance camera he believed would capture it.

The claims came after a blistering press conference during which furious police bosses alleged that he mailed himself a threatening letter then staged a hoax attack because he was unhappy with his $1.8million Empire salary.

Chicago Police Department Superintendent Eddie T. Johnson abhorred him as a 'troubled young man' who has 'taken advantage of the pain and anger of racism to further his career' by allegedly lying that he was attacked by racist and homophobic assailants on January 29.