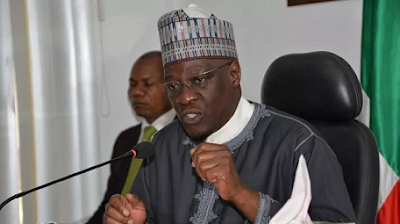 Governor Abdulfatah Ahmed of Kwara has disowned campaign posters circulating in parts of the state promoting him as the Kwara South Senatorial Candidate of the Peoples Democratic Party (PDP).

The governor spoke via a statement by his Senior Special Assistant on Media and Communications, Muyideen Akorede.

Mr Ahmed described the posters as fake since they were not approved, sanctioned or sponsored by him as he was no longer the PDP Kwara South senatorial candidate.


He said he stood by his earlier decision to concede the PDP Kwara South senatorial ticket to the incumbent senator, Rafiu Ibrahim, in the interest of equity and fairness.

Mr Ahmed added that he subsequently formally withdrew from the senatorial race in full compliance with the provisions and processes specified by the Electoral Act.

The governor said that on the basis of that decision, he had since campaigned for Mr Ibrahim and could, therefore, not have authorised the fake campaign posters. Lobatan!