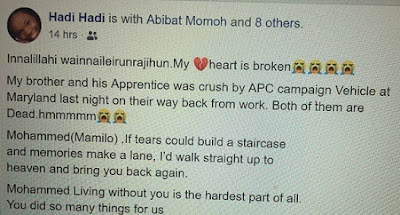 A man and his apprentice have allegedly been killed by a campaign vehicle belonging to APC in Maryland, Lagos. The incident happened on Saturday as the man and his apprentice were returning from work. They were said to have been crushed by the campaign vehicle and were rushed to hospital by those who hit them. But on getting to the hospital and they were told they brought them in dead, the men fled the scene.

His older sister who is based in Germany took to Facebook to mourn him saying life will never be the same for them again. What she wrote below and a photo of the man.

My brother and his Apprentice was crush by APC campaign Vehicle at Maryland last night. Both of them are Dead.hmmmmm😭😭

Mohammed(Mamilo) ,If tears could build a staircase
and memories make a lane, I’d walk straight up to
heaven and bring you back again.

Mohammed Living without you is the hardest part of all.
You did so many things for us
Your heart was so kind and true
And When we needed someone
We could always count on you

"I Remember back in those days that we had no Food to eat"
Mohammed you always provide for us and when your friends have nothing to eat, Mohammed,you give them your Food so that they don't go hungry and You go sleeping on an Empty stomach.
Mohammed your kind of person is always rare to find.

Mohammed (mamilo)....❤❤🙏🙏🙏
Your Gentle soul ascended to heaven, leaving behind a lot of pain and anger. We say goodbye to a Brother, father and a wonderful friend....Mohammed (mamilo).
Sun Oorun daradara'' 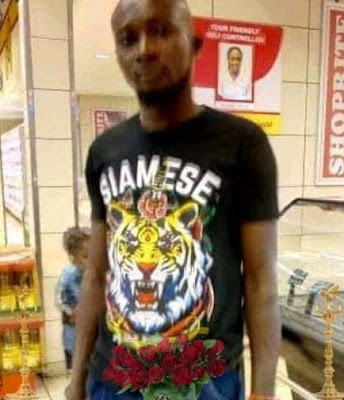 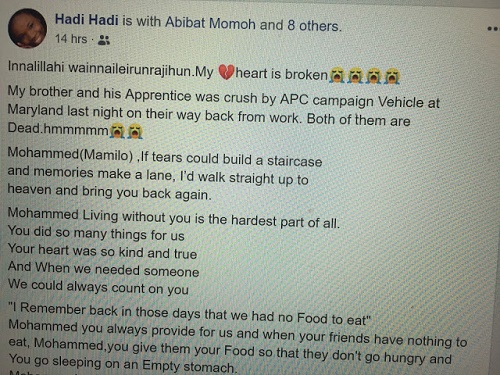