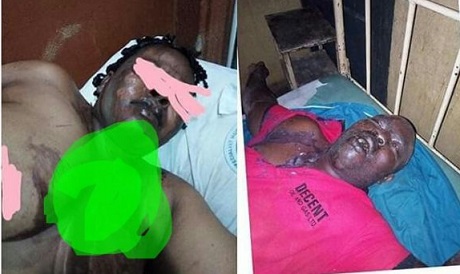 A middle-aged man, Daniel Okafor, on Wednesday committed suicide after allegedly pouring substance suspected to be acid on his wife in Nsugbe, Anambra state.

The deceased, a native of the town, was said to have taken his life around 2.30am after consuming the same deadly substance he attacked her wife with.

The Nation learnt that the deceased had accused the wife, Paulina Okafor of using their son as the next of kin for the house she built.

A resident who refused to disclose his name said: “The man attacked his wife after she built a house and used their son as the next of kin.

“When the man found out, he could not take it, so he decided to pour her acid. He also drank the acid as well.

“The man died this morning while his wife is currently hospitalized at an undisclosed clinic.”

Confirming the incident, the state police spokesperson, Haruna Mohammed, said the body of the deceased had been deposited at the morgue.

“On 06/02/2019 at about 03:am, there was a report at 3-3 Police Station Onitsha that one Daniel Okafor ‘m’ of Nsugbe allegedly poured some chemical substance suspected to be acid on his wife, one Mrs Paulina Okafor ‘f’ of same address.

“Following the report, Police detectives attached to 3-3 Division visited the scene and rushed the victim to Immaculate Heart Hospital Onitsha for treatment.

“The doctor confirmed that the suspect seems to have drunk some quantities of the chemical he allegedly poured on his wife.”

Mohammed added the victim was later certified dead by a doctor while receiving treatment, adding that his corpse was deposited at Apex mortuary for autopsy.

“Meanwhile, the wife is responding to treatment and case is under investigation to ascertain circumstances surrounding the incident,” he added.