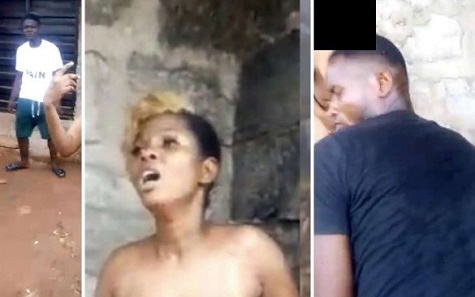 The prime suspect in a case where a lady was seen n-de in a viral video and pepper later inserted into her vagina has been arrested. According to a lawyer, Jefferson Uwoghiren who has been following the case from day one, the suspect was arrested yesterday evening.

According to reports, the lady and a man were said to have gone into a hotel to have a nice time, shortly after the affair, the man declared his phone was missing. The lady was searched and nothing was found on her. He then took her to a supposed native doctor who said she actually stole it. She denied this. The ‘doctor’ and others around then decided to strip her naked, inserted pepper into her private part and even r-ped her, Mr Jefferson claims.

Below is the update he gave last night on the very very sad incidence. God bless the police, God bless Mr Jefferson… justice on the way! YES!!


The middle aged man that mobilized thugs and street animals to rape and sexually molest a young girl in a trending video has been arrested. He was arrested this evening, along with the manager of a hotel he lodged briefly.

His arrest this evening, opened the lid on the motive and participants involved in the sordid attack. The suspect was temporarily and amorously linked with the victim and subsequently complained of a missing phone. He collared the victim to a native “doctor”, around Ugbiyokho area of Ekehuan Road, Benin City, to determine the culpability of the victim.

As customary with these fake and useless native “ doctors “, the victim was instantaneously pronounced guilty and asked to produce the missing phone. Victim’s denial and protest fell on deaf ears. The suspect, native “ doctor” and apprentice native “ doctors” pounced on the victim , beat her up, striped her naked, and procured granulated chilly pepper, popularly called “ Akpoko” in local language and inserted it into the victim’s private, all dramatically caught on video.

A massive manhunt is on for the fake and useless native “ doctor” and his apprentices . 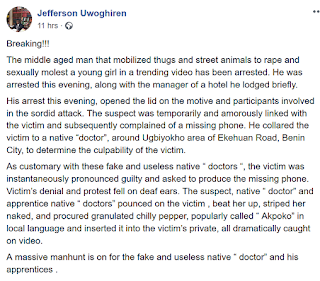