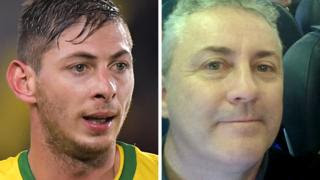 French football star Kylian Mbappe has donated £27,000 to a fundraising appeal set up by the family of missing pilot David Ibbotson.

Mr Ibbotson, from Crowle, Lincolnshire, was flying Cardiff City's Emiliano Sala from Nantes to the UK when their plane crashed near Guernsey on 21 January.

The footballer's body was recovered from the wreck on the seabed, but Mr Ibbotson's body has not been found.

Lineker linked to the page from his Twitter feed, saying: "Here's the Go Fund Me page should you wish to help this poor family".

Launching their own appeal, Mr Ibbotson's family wrote: "We are trying to come to terms with the tragedy and the loss of two incredible men.

"To be told the search has now been called off for the foreseeable future has only made this tragic time more difficult.

"We can not bear the thought of him being alone, we need him home so that we are able to lay him to rest."