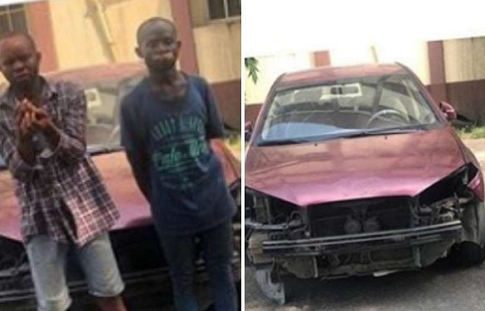 Operatives of the Rapid Response Squad, RRS of the Lagos State Police Command, have arrested two suspected members of a robbery gang that killed an Uber driver and made away with his vehicle at Ikate, Lekki area of Lagos.

The suspects, Humble Peter Robert, 33, and Gideon Achibong, 36, who were arrested in Aboki Estate while dismantling the stolen vehicle, a Hyundai Elantra with number plates EPE 676 EC, said another Uber driver is their leader.

The suspects and other members of their fleeing gang, whose identities were given as Emma, David and Dolapo, boarded the cab in Lekki at about 11p.m., last week and were heading to Ikate, when one of them told the driver, Sunday Obasi, that he wanted to urinate.


Unsuspecting Obasi, pulled over, only to be attacked and left to die while the thieves zoomed off in his car.

During investigation, one of the suspects, Robert, was discovered to be an ex-convict and a bus conductor. Robert and members of his gang were also discovered to have hijacked a vehicle from another Uber driver, three days before he was arrested.

During interrogation, Robert said: “When we flagged down the vehicle, he said he would collect N1,000. I sat in front while others sat behind. “As he pulled over, we seized and hit him with stones several times on his head. He begged us not to kill him that he was sick.

“We pushed him out and drove his wine-coloured Hyundai Elantra vehicle to Beach Road, Lekki, where we swapped its number plates with a Volkswagen Passat car’s—FKJ 708 CA.

We left it there for two days hoping to contact a buyer.

“Emma, who is also an Uber driver, is our ring leader. He masterminded the operation. He said that the deceased was operating offline. We did not know the man died, until one of us visited where we hijacked the car, next day and saw his remains in Police body bag.’

“We contacted Archibong to assist us in disposing off the car. But the buyers said they would only buy the parts.

“It was in the process of dismantling the car that RRS patrol vehicle spotted us and arrested two of us. Emma, Dolapo and David are on the run.”
at February 11, 2019