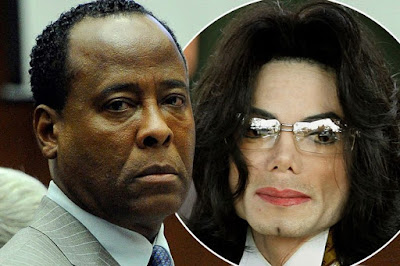 Michael Jackson wore condoms every night to stop him wetting the bed, according to his doctor Conrad Murray.
The medic who killed the King of Pop with a fatal injection of Propofol once claimed the pair were such close friends that he would hold the singer's p-nis every night and put the condoms on for him.
Murray, who served half of his four-year prison sentence for involuntary manslaughter, gave a bizarre and rambling interview about life with Jackson after being freed from jail.
In an interview with the Mail On Sunday in 2013, Murray said they had a bizarre bedtime routine to stop Jackson soiling his sheets
He said: "You want to know how close Michael and I were? I held his penis every night.
"I had to put a condom catheter on him because Michael dripped urine.
"He had a loss of sensation and was incontinent."
"Michael didn't know how to put a condom on, so I had to do it for him."
The world-famous singer even took medicine to shrink his prostate to help him urinate more easily, but still suffered with incontinence.
Murray added: "He wore dark trousers all the time because after he went to the toilet he would drip for hours."
Jackson was a "drug addict" who called Propofol his "milk" and would beg Murray to inject him so he could sleep, the former cardiologist claimed.
Murray admitted he'd been administering the surgical-grade sedative almost daily for the two months before Jackson's death, but was trying to wean the star off it.
The doctor also sensationally claimed Michael had given himself the dose that killed him, waiting for Murray to leave the room - in his words for just a couple of minutes - and injecting himself through an IV site below his knee.
"I believe he woke up, got hold of his own stash of Propofol and injected himself. He did it too quickly and went into cardiac arrest," Murray claimed.
Prosecutors at Murray's trial refused to believe the doctor had only left the room for a couple of minutes, and witness statements and phone records found he had either been on the phone or writing an email for more than 45 minutes before discovering Jackson's lifeless corpse.
Murray said in 2013 he had been expecting Michael's death to happen on his watch because the singer had prophesied it.
He claimed that Jackson had once looked and him and said: "You know, for the rest of your life and my life, our names will become inseparable." When Murray asked him what he meant, Michael merely smiled and said: "I am clairvoyant."