My Cousin Taught Me How To Burgle Shops - Suspect 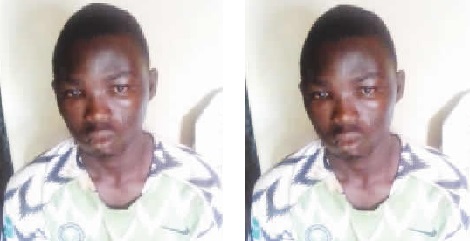 A self-confessed burglar, Daniel Olanrewaju, has ended up in police custody three weeks after he broke into a boutique in Agbado, Ogun State.

It was learnt that the 22-year-old suspect was accosted by some vigilantes in the community while he was roaming about last Tuesday night.

When he was questioned on his mission in the area, he reportedly could not give satisfactory answers. He was arrested and handed over to the police at the Agbado division.

After further interrogation, Punch correspondent gathered that he confessed to have burgled the boutique and stolen trousers, jerseys, among other clothes.


The resident of Somolu, Lagos State, reportedly led the police to arrest one Ibrahim, with whom he kept some of the stolen clothes.

Olanrewaju told City Round during the week that he burgled the boutique on January 28, 2019 at night. He said he entered the attic and broke the ceiling to gain access into the shop.

The furniture maker explained that after the operation, he took his loot to Costain area of Lagos and kept them with a friend.

He said, “I was very broke because I could not get any work from my customers. While I was thinking about the way out, it occurred to me that I could steal. I decided to go to somewhere far from where I live.

“On January 28, at night, I went to a complex at ‘Agbado under bridge’ and burgled a boutique. I broke the ceiling to enter the store. I stole several trousers and jerseys and ran away. I took them to my friend’s shop in Costain area of Lagos. I was thinking of how to sell them.”

He said when he could not find buyers for the items, he took some of them to Ibrahim, a tea seller in Agbado last Tuesday.

Olanrewaju explained that he was strategising on how to market the clothes without running into trouble until it was dark. He said he was stranded and decided to pass the night outside a shop.

He said, “As I wanted to sleep, a vigilante shone the torchlight on me. I ran to hide somewhere. The man alerted other vigilantes and I was caught. They asked me what I was doing outside at night and I told them I was stranded. They were not satisfied with my response and they threatened to kill me if I did not say the truth. That was why I decided to tell them about the crime.

“They beat me up and took me to the police station. I mentioned Ibrahim and the police arrested him. He did not know that I stole the clothes.”

Asked if he had been involved in the crime in the past, Olanrewaju stated that he was exposed to the act by his cousin while he was living in Benin Republic, where his father hailed from.

He said, “I am a secondary school leaver and I learnt how to make furniture. I had once lived in Agbado with my parents before I relocated to Somolu. I was born in Lagos but my father was from Benin Republic. He died in 2016 from sickness. I relocated to Benin Republic with my mum.

“One evening, my uncle’s son asked me to follow him somewhere. We hung around till 12am and he broke into a phone store through the attic. He asked me to keep watch outside. After some minutes, he came out with a lot of phones and we went back home. That was how I learnt how to break into shops. I relocated back to Nigeria in 2017 and I started living in Somolu.”