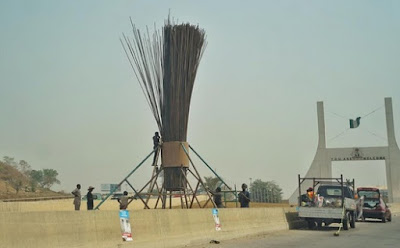 Nigerians have taken to social media to express disappointment over the construction of a giant broom in front of the Abuja City Gate.

Residents of the Federal Capital Territory (FCT) noted that as of Thursday, it wasn’t clear what was being constructed when they began, but afterwards, it turned out to be the broom symbol of the All Progressives Congress.

A Twitter user, @adex0057, uploaded a photograph of the broom taken as on Thursday, and he tagged the Guinness World Records writing;

“WORLD LARGEST BROOM Attention: @GWR This is the Largest Broom anybody or group has ever [erected] anywhere in the world. This is work of some group of volunteers of @OfficialAPCNg . It deserves your recognition and honour. However, the presence of the APC broom has caused disappointment and anger . See reactions below....

So there’s a giant broom right before the City Gate in Abuja, representing the APC LOGO 😩😩😩😩 pic.twitter.com/Tp3AYdfQ6B
— Nma💦 (@NmaObuh) February 8, 2019

Quiz: How much did it cost APC to erect that ugly broom at City Gate in Abuja?

APC is beginning to scare me. Why are they erecting a massive broom in front of Abuja's gate?
— 008 (@theVictoriaKing) February 8, 2019