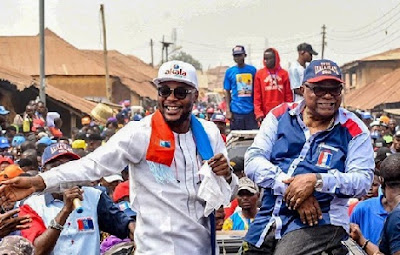 Olamiju Alao-Akala has left the All Progressive Congress (APC) for Action Democratic Party (ADP), where his father, a former Governor of Oyo State, Adebayo Alao-Akala is the gubernatorial candidate for Saturday’s election.

Olamiju who is currently the chairman of Ogbomoso North Local Government Area joined his father has they led hundreds of their supporters in a road show around Ogbomoso town.

Lamiju who later addressed the crowd said; ''I am back home. Alao-Akala is everybody’s father, not my father alone. He has done it before, he will do it better. He is the most qualified for the job. Vote for him. I am back home, I am now in AD''. He also released a statement to this effect… Read that below…

I Have Returned Home

Events of recent times in the Oyo State political sphere particularly Ogbomoso North has set tongues wagging but no matter what, blood is always thicker than water, irrespective of what happens, water will always find it's level.

Without over-flogging a scenario that is in the public domain, I wish to first appreciate God for the grace to be alive and in good health, appreciations also to my biological father, in person of Otun of the Source, Bobajiroro of Owu, Chief Adebayo Alao Akala for raising me to be a man that I am and for giving me everything it takes to be a man in the real sense of the word

Appreciation also to my political father, @abiolaajimobi Aare of Ibadan land, Sheu Abiola Ajimobi and my mother Mrs Florence Ajimobi for all the love and support I have received from Ajimobi family.

I equally appreciate the All Peoples Congress, the APC for giving me the platform to make an entry into the political sphere, utmost appreciation goes to the loving and supporting people of Ogbomoso land, particularly Ogbomoso North local government for believing in me.

To all political stalwarts regardless of political party inclination, I remain indebted to everyone for supporting me all through.