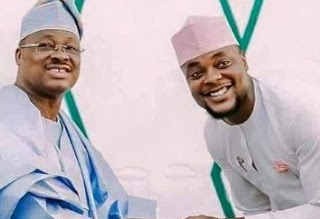 The Oyo State government has endorsed the sack of Mr Olamijuwon Alao-Akala, a son of former Governor Adebayo Alao-Akala, as the Executive Chairman of Ogbomoso North Local Government Area.

In his place, former Vice Chairman Abas Bello has been sworn in an acting capacity to chair the council.

The decision followed the change of party by the sacked local government chairman from the ruling All Progressives Party (APC) to the Action Democratic Party (ADP), the platform on which his father is contesting the governorship seat.


The government made the announcement as well as the swearing-in of the acting local government chairman yesterday through the Commissioner for Local Government and Chieftaincy Matters, Mr Bimbo Kolade, at the state secretariat in Ibadan, the state capital.

The sacked council chief was elected on May 12, last year, on the platform of the APC, but alongside some of his councillors, he defected to the ADP to support his father’s ambition.