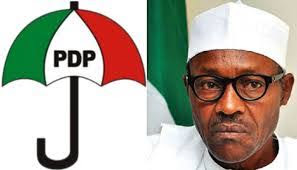 The Peoples Democratic Party has sued President Muhammadu Buhari over his directive to the  security agencies to deal  ruthlessly with ballot box snatchers during the general elections.

“I really gave the military and police order to be ruthless,” Buhari had said on Monday.

“Anybody who thinks he has enough influence in his locality to lead a body of thugs to snatch ballot boxes or disturbs the voting system, will do so at the expense of his own life.”

In a suit filed before the Federal High Court in Abuja, the PDP  asked the court to declare  the directive as unconstitutional, unlawful and void.


The party also sued the  Minister of the Federal Capital Territory, Mohammed Bello, before a  High Court in the FCT  over the “gigantic broom” erected by the All Progressives Congress  near Abuja city gate.

The PDP urged the court to issue an order compelling the minister to investigate the allegations of intimidation and illegality that the structure may cause.

The party said this followed  the FCT administration’s  failure to take action against the broom,  which it said was an “improper structure”.