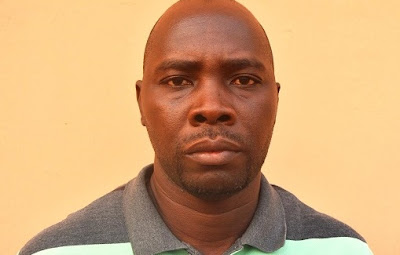 The Economic and Financial Crimes Commission, EFCC, Ibadan Zonal Office has arrested one Kola Al-Amin, a former staff of the Joint Admission and Matriculation Board, JAMB over alleged forgery and obtaining money by false pretence.

His arrest followed a petition alleging that sometime in November, 2010, Kola who operates under the name of “Cool Technologies Consult Limited” with office located at No.4/900, Taiwo House, Second Floor, Yemetu Total Garden, Ibadan, Oyo State approached the complainant, a microfinance bank (name withheld) with a Local Purchasing Order (LPO) for the supply of internet hardware which he claimed was from JAMB headquarters, Abuja.

He requested the microfinance bank to advance him a loan of 10,000,000.00 (Ten Million Naira) only to finance the LPO.


The petitioner further alleged that Kola was granted the loan with the agreement that the proceed of the LPO from JAMB will be paid directly into his account with the microfinance bank but that at maturity time for repayment, he allegedly disappeared and on verification of the LPO in JAMB headquarters, Abuja, it was discovered that the LPO provided by the suspect was forged and that he was no longer a staff of the organization.

Additional investigation revealed that the suspect has been involved in several other fraudulent deals under the same guise of being a JAMB official.

He will be charged to court upon conclusion of investigations.