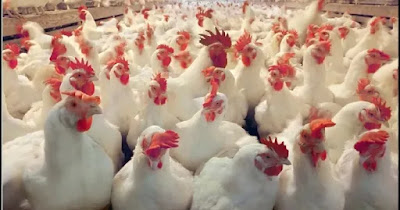 The police in Osun on Monday arraigned Lateef Ajetomobi, 43, and Saraju Yekini 33, in an Osogbo Chief Magistrates ‘ Court for allegedly stealing 2,514 chickens.

The police charged Ajetomobi and Yekini with three counts of theft, conspiracy and deceit. The Prosecutor, Insp Joshua Oladoye, told the court that the defendants committed the offence between May 2018 and August 2018, at Olu farm limited, Osogbo. Oladoye alleged that the defendants and others at large, stole 2,514 chickens valued at N3 million, belonging to one Akosu Samuel.


The defendants pleaded not guilty to the charges against them. The defence counsel, Mr Emmanuel Adebisi , prayed the court to grant his clients bail in the most liberal terms.

The Magistrate, Mrs Aishat Olayemi, admitted the defendants to bail in the sum of N500,000 each and one surety each in like sum. Olayemi ordered that the sureties must reside within the court’s jurisdiction with evidence of tax payments and three passport sized photographs, attached with an affidavit of means. She adjourned the case until March 11, for hearing