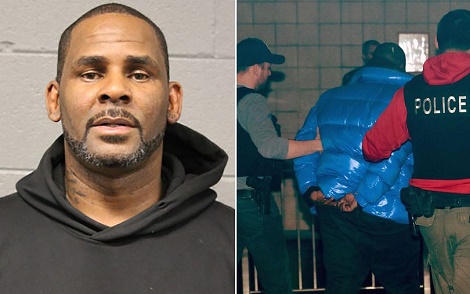 R Kelly 's bail has been set at $1 million following his arrest on sex abuse charges.

The singer, real name Robert Kelly, 52, appeared in court in Chicago today after being held by police overnight.

It was the same judge who oversaw Jussie Smollett's bond hearing earlier this week when the actor - accused of filing a false police report - was released on £76,693 bail.


He faced the court wearing a black hoodie and kept his hands behind his back throughout the hearing.

The singer is described as showing "very little emotion" and kept his eyes fixed on the floor for the majority of his time in court.

The judge described the allegations against Kelly as "disturbing" and ordered him not to have contact with anyone under the age of 18.

Kelly's attorney reportedly argued that the star is currently broke due to a number of financial setbacks.

Attorney Steven Greenberg is said to have told the judge Kelly has a child support judgement against him that he's unable to pay and he's not making any money.

Greenberg claimed Kelly's earning very little from his music and is not touring.

He also said his client was not a flight risk, telling the judge: "Contrary to the song, Mr Kelly doesn't like to fly."

He was referring to Kelly's huge hit single I Believe I Can Fly.

The entertainer faces a maximum sentence of 70 years in prison if convicted.
at February 23, 2019