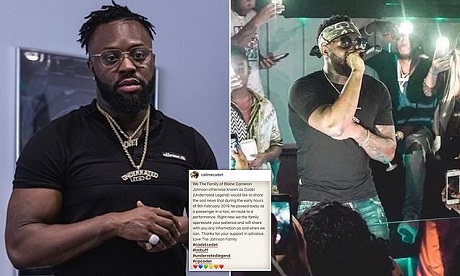 British rapper Cadet was killed in a horror taxi accident en route to a performance at Keele University in the early hours of the morning.

The 28-year-old musician, real name Blaine Cameron Johnson, was a passenger heading to the Staffordshire gig when a Toyota Prius and a red Vauxhall Combo van crashed on Main Road, Betley at 1.30am.

Despite efforts by paramedics to revive him, Johnson died at the scene, while the two drivers, men aged 36 and 22, were taken to the Royal Stoke University Hospital with serious injuries. Three other passengers in the Toyota were treated for minor injuries at Leighton Hospital in Crewe.


A statement from Johnson's bereft family shared on his Instagram read: 'We the family of Blaine Cameron Johnson known as Cadet (Underrated Legend) would like to share the sad news that during the early hours of 9th February 2019 he passed away as a passenger in a taxi, en route to a performance.

'Right now we the family appreciate your patience and will share with you any information as and when we can. Thanks for your support in advance. Love The Johnson Family #cadetcadet #imbuff #underratedlegend #ripcadet.'

Cadet was the cousin of Krept, of duo Krept and Konan; the Freak Of The Week rapper tweeted: 'Absolutely broken.'

Tributes have poured in on social media for the rising star from a stunned British music scene.