Robert Kraft Prostitution Video Might Never Make It Out… Lol 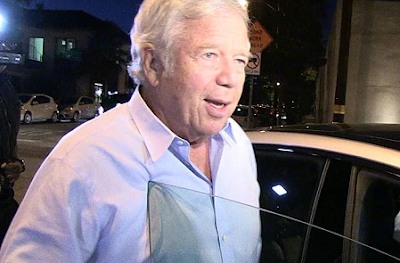 Cops are not planning to release the graphic Robert Kraft massage parlor video anytime soon and law enforcement sources say officials are still determining if they will ever make it public.

Recall the Jupiter Police Dept. claims they have graphic video of the New England Patriots owner inside the Orchids of Asia Day Spa in January showing the 77-year-old receiving s-x acts in exchange for money. Officials say the footage will be used in the case against Kraft.

According to the Palm Beach State Attorney's Office -- which is prosecuting the case, the only law enforcement agency currently in possession of the footage is the Jupiter P.D.


A rep for JPD however says, "It's not releasable right now ... nothing is going to be released anytime soon."

If officials however do decide to release the footage, it's almost a certainty the video will be heavily blurred -- in other words, if you're expecting to see lewd, raw video of Kraft, don't hold your breath.

As for Kraft, he has previously issued a statement denying he "engaged in any illegal activity" -- but never denied actually visiting the spa.

Officials say he'll be prosecuted for 2 counts of misdemeanor soliciting another for prostitution -- and if convicted, he faces up to a year in jail.