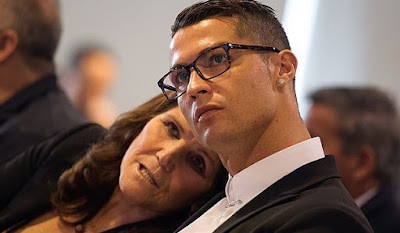 Cristiano Ronaldo's mother has spoken out to defend the football star against r-pe allegations which have rocked his career.

Dolores Aveiro said she had 'confidence' in the 34-year-old Portugal forward and insisted: 'I know the son I have.'

The mother-of-four also lashed out at Ronaldo's American accuser Kathryn Mayorga, saying she 'didn't go to his hotel room to play cards'.

Mayorga accuses Ronaldo of raping her in a Las Vegas hotel room in 2009 but the Juventus player has strongly denied the claims.


The former model also claims she was coerced into signing a £290,000 settlement for her silence.

At a PR launch in Lisbon she said: 'I have confidence in my son when it comes to what happened.

Dolores, who spends most of her time in her native Madeira, showed her backing for her son on social media last October by posting a picture on him in a Superman cape.

It was posted alongside a message which read: 'I want to see who has the courage to put this photo on their profile for a week and make a chain for him..for Portugal, for him, for us and for the union of our people, for justice. He deserves it.'